courtesy of The Nelson-Atkins Museum of Art

Over 61,000 people visited @nelson_atkins last month & I think I talked to all of them! 🙂 Thanks y'all for coming!

Despite the exhaustion that many of us feel at the end of the workday, it is an astonishing thing to witness so many people galvanized and transformed by seeing remarkable works of art in person.  The Museum is filled with visitors of every stripe, and a buzzy hum of activity can be heard throughout the buildings. 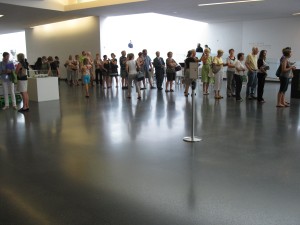 What has been especially satisfying is how the exhibition kick-starts related artistic experiences.  Visitors ask where they can find other Impressionist works in the Collection, how they can learn more about conservation science, if there are any resources available that delve deeper into Monet’s life and work, or for paper and pencils so they can sketch in the galleries.  It’s also inspired my own artistic leanings.

thanks to Tate Kids for the coloring sheets