On the way. Personal photo by Adrianne Russell

This past weekend, The Roommate and I hit the road. As I’ve mentioned before, having a lot of vacation time plus the ability to use it during the summer it is a strange new blessing. So with wanderlust rushing through our veins and all sorts of omens screaming “Get out of town!”, we headed for Wichita.

Besides being name-checked in The White Stripes’ “Seven Nation Army”, many people are unfamiliar with Wichita but that seems to be changing. During the Wichita State University men’s basketball team’s amazing Final Four run this year, much attention was pointed toward the largest city in Kansas and deservedly so. It has a lot to offer!

Our trip was pretty short so I wanted to make sure I visited the Wichita Art Museum. Located in the Museums on the River District (comprised of five museums bordering the Arkansas River that winds through the city), WAM is the largest art museum in the state with nearly 7,000 works by American artists in its collection.

The exhibition, “Murdock and Beyond: Pairings from the Permanent Collection” was a great introduction to the breadth of WAM’s collection and helped me view art by familiar artists in new ways. The juxtaposition of bright paintings with wood and bronze sculptures and Stueben glass the color of white chocolate definitely indulged my mash-up installation style.

Nearby, the ongoing exhibition “American Impressionists,” located in the Carlene and Lee Banks Rotunda Gallery was a nice surprise. I particularly enjoyed seeing Childe Hassam’s Jelly Fish and Mary Cassatt’s Mother and Child (which would pair up quite nicely with Henry Varnum Poor’s Mother and Child, now that I think about it).

On our way out of town, we stopped by Newton, Kansas. The visit was two-fold: indulge in the unique culinary treat that is Braum’s and see the Blue Sky Sculpture, a 20 x 30 foot glazed tile mosaic installed in Centennial Park. 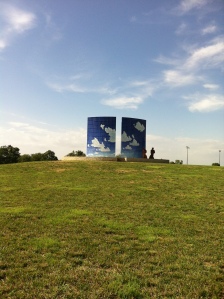 It was really striking both from afar and up-close. The artists’ intention was for viewers to have multiple angles from which to slowly contemplate the work and that is definitely achieved. When standing beside it and looking up, the blue sky depicted on the tiles arcs directly into the actual one, making them rather indistinguishable.

This short getaway was just what I needed and I’m really enjoying discovering the creative side of Kansas. Any tips on where I should go next?