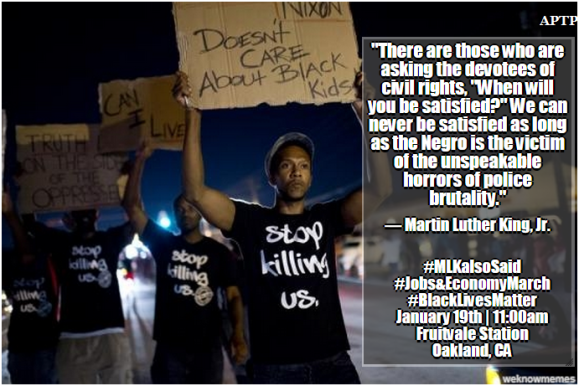 Each year, the Martin Luther King, Jr. holiday occurs with the usual fanfare–parades, speeches, a day off work, and calls to engage in consumerism. Multicultural gatherings abound throughout the U.S. where we regale each other with tales of racial inequities long past and metaphorically pat ourselves on the back for our progressivism: “Racism was a problem back then but Dr. King fixed that. We have a Black President. If that’s not proof we’ve overcome, then what is?”

We trot out examples of black “achievement” with no mention of the fact that these admirable people are still “firsts” and “onlys.” We list the places black people can engage politically, live, and entertain themselves without talk of gerrymandering, redlining, and gentrification. We celebrate forward motion without reflecting on the past while turning a blind eye to the present. To do otherwise is to challenge the belief that we live in an inclusive society where racism is anathema.

This collective delusion encourages whitewashing Martin Luther King, Jr.’s legacy. It removes radical elements of his work and personality considered undesirable and unlikeable in favor of a saintly, sanitized image of passive benevolence. It reframes his specific and strategic mission of eliminating social, political, and economic disparities for blacks to being the savior of all. It strips him of his humanity and transforms him into a magical negro whose sole purpose is to help white people. It causes well-meaning allies and racists alike to use him as a cudgel against black people who dare to affirm their lives matter. It purports his assassination was a random act of violence rather than the culmination of government-sanctioned terrorism.

This year, put aside what you’ve been taught and what you think you know. Critically examine and challenge the pervasive and harmful false narrative surrounding Martin Luther King, Jr. Follow the conversations at #MLKAlsoSaid and join the efforts of Reclaim MLK.

If you truly believe in fighting for justice and equality, let it be more than just words. Take action.